"Promoting health in partnership with a Federally Qualified Health Center: Our Journey" 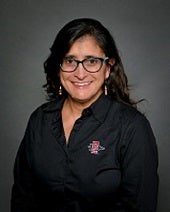 Guadalupe Ayala, Ph.D. is a professor in San Diego State University School of Public Health, director of the Institute for Behavioral and Community Health (IBACH), director  of the SDSU HealthLINK endowment, and co-director of the SDSU HealthLINK Center for Transdisciplinary Health Disparities Research. IBACH is a non-profit research institute comprised of 16 SDSU-affiliated researchers dedicated to addressing health disparities among Latinos/Hispanics, sexual and gender minorities, and other marginalized and underserved populations. SDSU HealthLINK is a $10 million endowment from the National Institute on Minority Health and Health Disparities (NIMHD) to build a research infrastructure that supports the use of new technologies and big data in health disparities research. The SDSU HealthLINK Center is a cooperative agreement with NIMHD to further develop research infrastructure at SDSU to support minority health and health disparities research. The center is co-led by Dr. Kristen Wells, associate professor of psychology and it is part of the Research Centers at Minority Institution’s Translation Research Network.

Ayala completed her Ph.D. in clinical psychology with a specialization in behavioral medicine in 2002, received an M.P.H. in health promotion in 2002 and an M.A. in experimental psychology in 1997. She completed clinical residency at the University of Washington, Seattle’s School of Medicine, Public Behavioral Health and Justice Policy department then started her faculty career at the University of North Carolina, Chapel Hill, Gillings School of Global Public Health (2002-2005). She joined SDSU as an assistant professor in 2005 and was promoted to professor in 2011. Dr. Ayala served as the associate dean for research in the College of Health and Human Services from 2014 to 2017 and the associate director for research in the School of Public Health from 2017-2018.

In addition, she has led several intervention and observational studies funded by the National Institutes of Health, the Centers for Disease Control and Prevention, and the Robert Wood Johnson Foundation’s Healthy Eating Research program, among others. She has received over $40 million in extramural funding. Dr. Ayala’s work examines a range of factors related to health and well-being in children, adults, and families, including improving access to and consumption of healthy foods by working with small food stores and restaurants, promoting physical activity through community health worker support, and preventing and controlling obesity, diabetes, and asthma through system change. Her research has produced over 200 peer-reviewed manuscripts, including several systematic reviews and evidence-based interventions. In 2019, Dr. Ayala was presented with the Wang Family Excellence Award for Research from the California State University system.